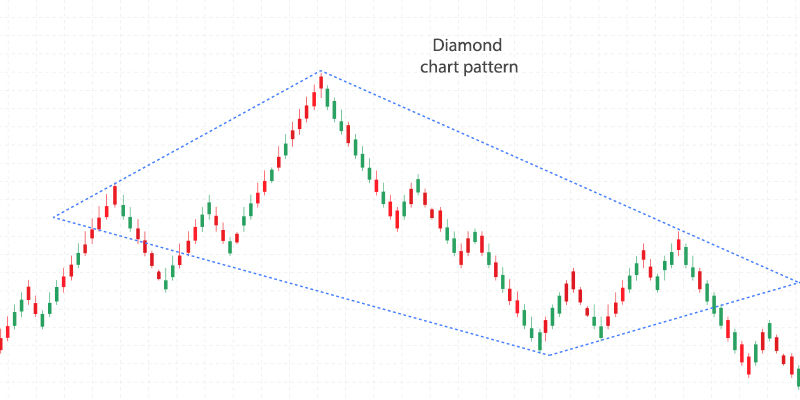 The diamond chart pattern is one of the reliable chart patterns mostly used by the day traders to identify the potential uptrend reversals. The bearish diamond’s occurrences are far more prevalent than their bullish counterparts. The diamond pattern has enabled a large number of traders to make quick profits.

Forex markets, because of their high liquidity, gives way to more diamond formations than any trading counterpart.

An offset head & shoulders formation is chosen for the trend lines to be sketched. The left shoulder and the head are connected through a straight line. The head is then connected to the peak of the right shoulder. This forms the upper boundary of the diamond. The price must not break the boundary for it to remain in the pattern.

The right time to take the trade is by the completion of the pattern. The breakdown is most likely to happen right after the formation of the diamond, so shorting at the end of the right shoulder could prove to be beneficial.

The safest exit is marked from the right shoulder with the difference in value between the highest Peak and the deepest crevice within the pattern. The diamond pattern’s breakdown has more profit potential than just the difference between the peak and trough, but, more than that is a risk.

Stop loss is a counter-measure to limit your losses in case of the failure of your analyzed pattern. It is most advised to place the stop loss at the last peak formed before the completion of the diamond.

Bullish diamond chart pattern, also known as the diamond bottom is also an existing pattern which is straight opposite to what we have seen, except for the profit potential. It is used to identify the downtrend reversal, but their formation is scarce when compared to the bearish diamond tops.

For the Bullish diamond pattern, the entry is the same as that of the diamond top, but the exit by the uptrend and the stop loss is placed at the last trough formed inside the pattern.

Before trying the learned chart analysis pattern in real time, use the historic trading charts to check if you can identify the right pattern. Novice traders, because of their overwhelming enthusiasm, often put their knowledge to work before testing it out and incur heavy losses. Learning diamond pattern makes no difference if you don’t practice and hone your skills.